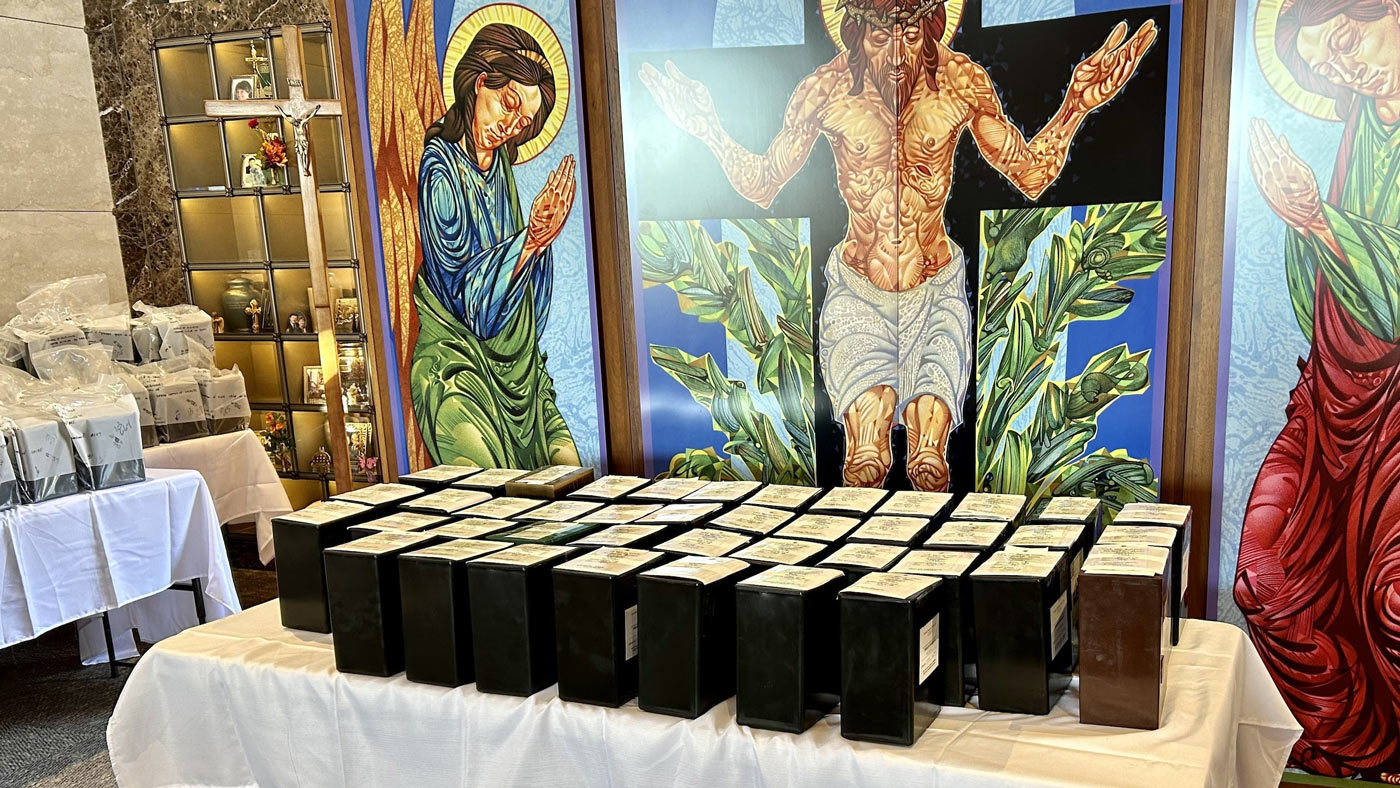 The cremated remains of 579 individuals are pictured during an All Souls Remembrance ceremony Nov. 2 at Our Lady of Hope Cemetery in Brownstown Township. The Federal Bureau of Investigations gave the unclaimed remains to be interred alongside 420 individuals who were brought to three Catholic cemeteries as part of Catholic Funeral and Cemetery Services’ All Souls Remembrance program. (Photos courtesy of Deanna Cortese)

BROWNSTOWN TOWNSHIP —  On Nov. 2, Catholic Funeral and Cemetery Services worked with the Federal Bureau of Investigations to inter the unclaimed cremated remains of 579 individuals the bureau had in its possession.

The FBI contacted the ministry about interring the remains that originate from an investigation that spanned over a 10-year period, Deanna Cortese, director of outreach for Catholic Funeral and Cemetery Services, told Detroit Catholic.

The bureau attempted to contact family and next of kin of the deceased, Cortese said, and turned to Catholic Funeral and Cemetery Services to inter the remains of those for whom no family contacts were able to be established.

Auxiliary Bishop Gerard W. Battersby blessed the remains at Our Lady of Hope Cemetery in Brownstown Township on Nov. 2, in connection with the cemetery’s All Souls Day celebration.

“This came about after an investigation the FBI was doing where they were trying to return all of the individuals that were involved in the case to their families,” Cortese said. “Unfortunately, approximately 579 deceased individuals were not able to be returned to anybody in their family or next of kin, so they were left with these remains in their possession.”

The cremains were buried alongside 420 remains brought to Our Lady of Hope Cemetery, Holy Sepulchre Cemetery in Southfield and St. Joseph Cemetery in Monroe by various families as part of Catholic Funeral and Cemetery Services’ All Souls Remembrance program.

“(The FBI) wanted to give them a proper, dignified burial, so one of their agents reached out to us through our All Souls Remembrance Program and inquired whether or not we’d be willing to take on these individuals and lay them to rest in the cemetery, which we did today,” Cortese said. 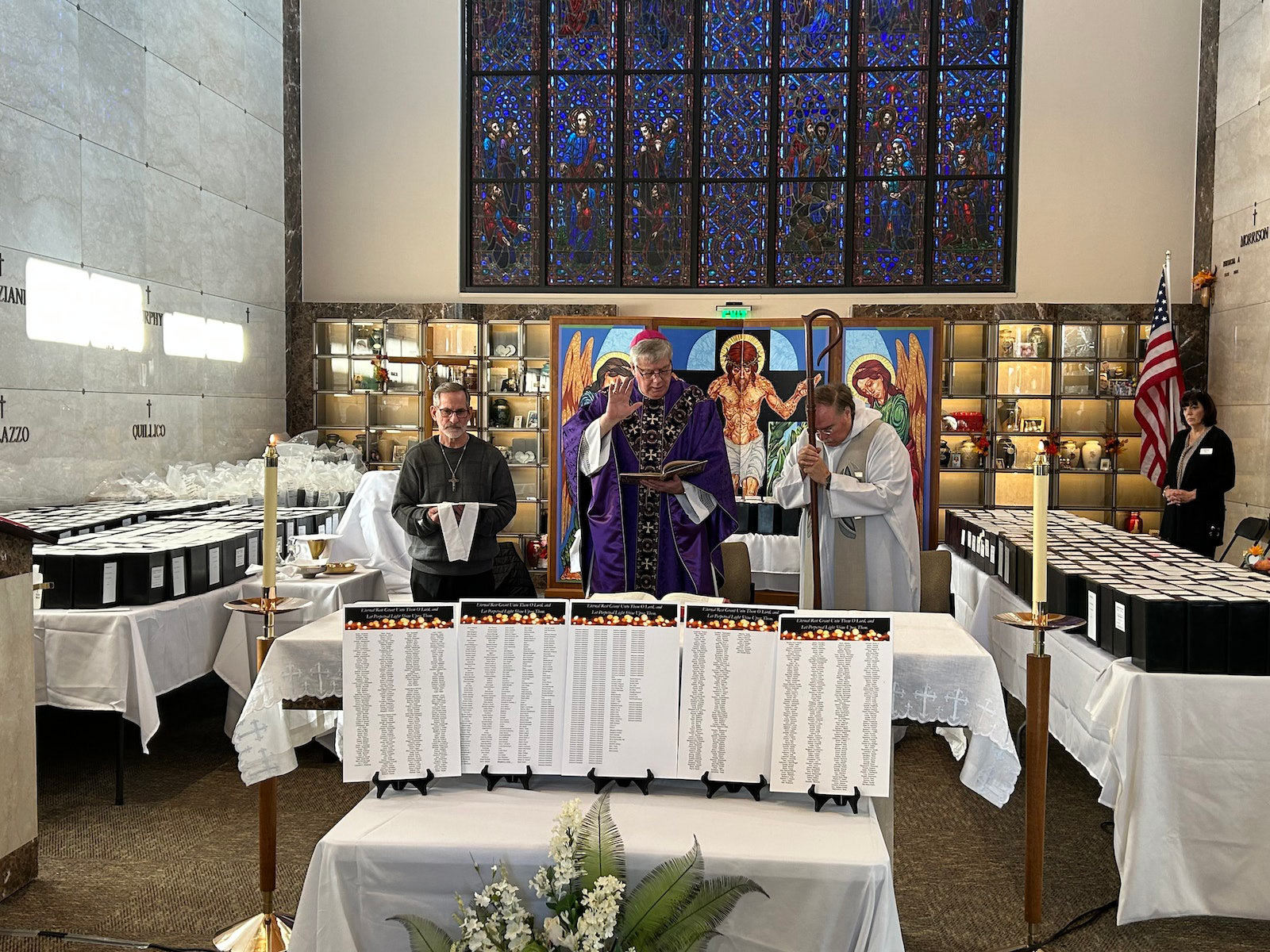 Detroit Auxiliary Bishop Gerard W. Battersby blesses the cremated remains of individuals during the All Souls Remembrance ceremony Nov. 2 at Our Lady of Hope Cemetery in Brownstown Township.

This is not the first time Catholic Funeral and Cemetery Services has worked with government authorities in burying unclaimed remains, Cortese added.

“Back in the early 2000s, we worked with the Wayne County morgue where they laid to rest 170 or so full bodies that were unclaimed,” Cortese said. “We have an area where Wayne County laid these individuals to rest at Our Lady of Hope, so we’ll be creating an area adjacent to the Wayne County burial for this group.”

The cemetery will erect a cenotaph on the burial location of the cremains that will feature the names of the deceased. For those who are unidentified by the FBI, a line on the cenotaph will read “Unknown” for every unidentified person.

“The FBI has exhausted all of their resources to try to find family members for these individuals,” Cortese said. “Other individuals who were part of this case were returned to their loved ones; so these are the remains of those whose families were not able to be found.” 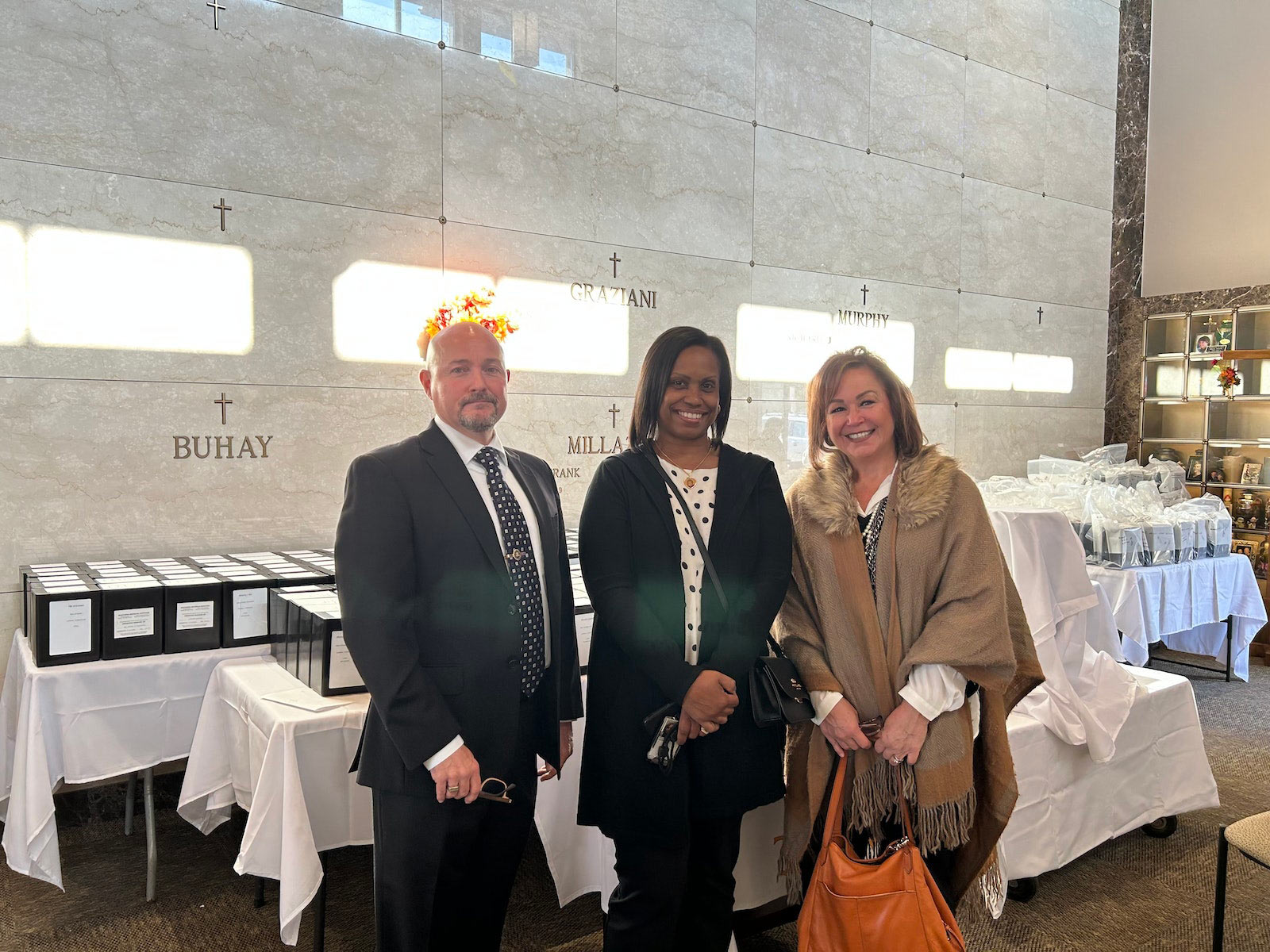 FBI agents contacted Catholic Funeral and Cemetery Services about interring unclaimed cremated remains the organization had in its possession from a previous investigation.

Cortese said an integral part of Catholic Funeral and Cemetery Services’ mission is praying for and remembering the deceased, regardless of their circumstances, adding that all of God’s children deserved to be buried on consecrated ground.

“The people buried at our cemeteries are prayed for every day by our staff, by families visiting the cemetery,” Cortese said. “And for many this might be the first time that they were ever in a church, but they are being prayed for no matter what their station was prior to death.”

The morning before All Souls Day, Cortese recalled, cemetery staff were moving the cremains to a table to be blessed by the auxiliary bishop before they were interred in their final resting place.

“When we were done, I sat down and just looked, and the only way I could describe it was God’s hand was in that place at that moment,” Cortese said. “No matter what their circumstances were, whether they were born poor, rich, or didn’t have any family, it didn’t matter; they were a child of God. I sat there and looked throughout the chapel and room, seeing all of those people, and it just was evident that God was present and God was the one who made this happen.” 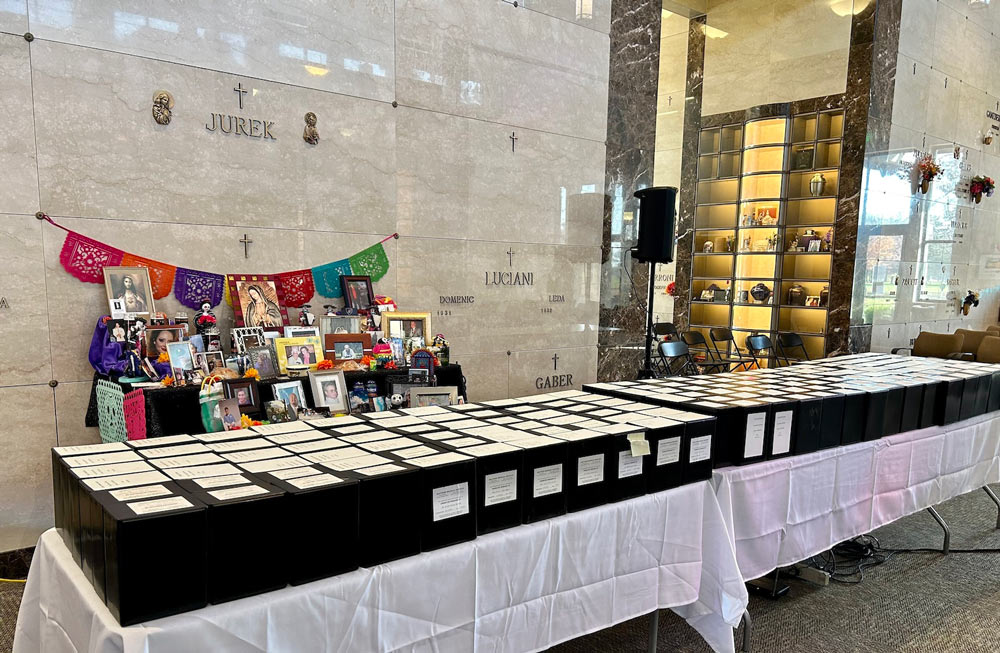 Deanna Cortese of Catholic Funeral and Cemetery Services said it is part of the cemetery’s mission to see that all children of God are buried on consecrated ground.