The “Lay Them to Rest” program in Madison, Wisconsin, follows the lead of similar diocesan programs in Milwaukee, Detroit, Seattle, Denver, Lincoln, and other places. 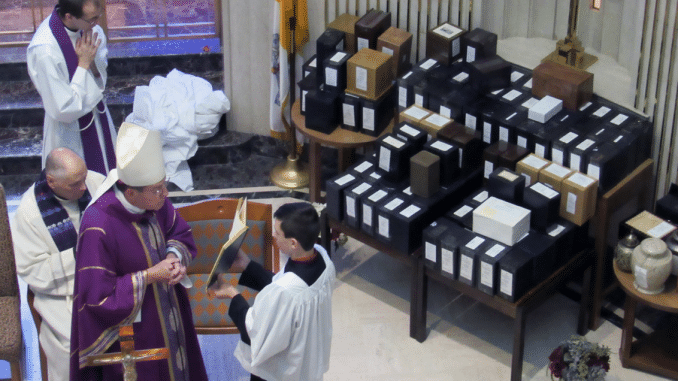 MADISON, Wisconsin — Bring them home to holy ground for All Souls Day.

That is the message and the simple goal of “Lay Them to Rest,” a new program at two Diocese of Madison cemeteries. Bring the cremated remains of your loved ones home to the consecrated ground of a Catholic cemetery for interment, at no cost. It is the latest response to a growing Catholic Church problem: cremated bodies that don’t end up in a cemetery after the funeral.

“One question I asked when I started as director of cemeteries for the diocese was whether all Catholics were being buried in Catholic cemeteries,” said Damian X. Lenshek, director of cemeteries for the Diocese of Madison. “The answer is ‘no’ for various reasons, but one that really stuck with me correlated with the increase in cremation. Specifically, more than half – some sources estimate much higher – of cremated remains are never laid to rest in a cemetery. Often they are retained in private residences until they become the property of the next generation.”

The Diocese of Madison will conduct committal rites for cremated remains November 7 at Resurrection Cemetery in Madison and Mount Olivet Cemetery in Janesville. Families can bring urns with cremated remains and have them entombed in a cremation crypt at each cemetery’s mausoleum. There is no cost, although advance registration is required. The deceased will be entered in the cemetery’s burial registry and family will then always know the location of their loved one’s final resting place. Bishop Donald J. Hying will preside at the committal rites.

The program’s goal is to ensure all the dead receive a proper burial, or what the Catholic Church calls a “reverent disposition” of the body. An unknown but potentially large percentage of cremated bodies repose on shelves, tables and mantles of family homes, in vaults at funeral homes and in municipal morgues— instead of buried in holy ground as the Church prescribes. In this they risk being forgotten, or treated with less than the respect that is due the remains of a person with God-given dignity.

The Madison program follows the lead of similar diocesan programs in Milwaukee, Detroit, Seattle, Denver, Lincoln, Nebraska, and other places. Catholic cemeteries are responding to this cremation crisis by removing the financial and logistical barriers to encourage families to properly bury their loved ones. The issue could easily involve many tens of thousands of cremated remains going back decades.

The Archdiocese of Detroit has interred about 4,000 cremated bodies through its annual Gather Them Home program in November and a monthly third-Friday Mass with committal rites. The monthly program averages 50 cremated remains for interment. The remains are laid to rest either in a mausoleum crypt or in earth crypts, at no cost to the families. The program generated a strong response from its inaugural run in 2016.

“On the particular day we had about 205 families that brought their loved ones to us on All Souls Day to have them inurned,” said Deanna Cortese, outreach director for Catholic Funeral & Cemetery Services at the Archdiocese of Detroit. “I can tell you there were some extremely powerful moments where the Holy Spirit was at work, when people released their loved ones to our care. It was pretty humbling.”

The following week, another 200 families who were not able to make the All Souls Day event approached the diocese, Cortese said. “We’ve just continued every month with the All Souls remembrance program. It has just kind of spread word of mouth, and it has brought such comfort to families, knowing they have this option if they’re unable to financially afford it.”

Associated Catholic Cemeteries in the Archdiocese of Seattle dedicated the Cabrini Sanctuary at Calvary Cemetery in Seattle to hold cremated remains at no cost to families. “We find that families are most grateful,” said Richard Peterson, president of Associated Catholic Cemeteries and the current president of the Catholic Cemetery Conference, a national trade group. “The other thing that we have found is that some families at a later date and of their own accord decide to place their loved one in another location in the cemetery so they can create a family lot.”

Families that choose to keep cremated remains in their homes usually do so either because they are having trouble saying goodbye, or they cannot afford to purchase a dedicated columbarium niche or other burial space.

“The one gentleman that sticks out from our Gather Them Home at St. Joseph’s Cemetery in Monroe,” Cortese said, “he had his wife at home with him for maybe twenty years. He was carrying her up, so lovingly carrying her up in her urn. It was just a moment that was so personal and intimate for him to let her go, in his grief after all those years. So I would say grief is the number one reason.” 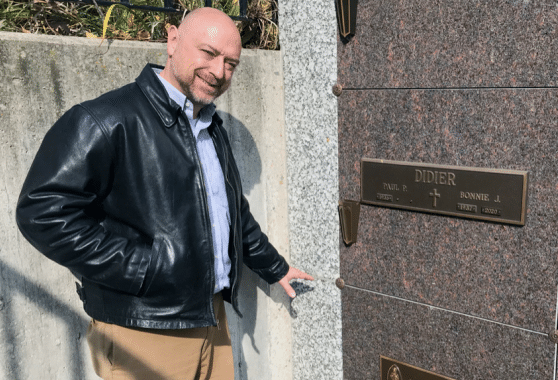 Lenshek said cremation removes the practical need for burial immediately after the funeral. “You lose the urgency. There’s an urgency to burying a body, and I think that’s good,” he said. “The pace of the decomposition of the body and the stages of grief, I think there’s a parallel there. It’s good for us, you’re not rushing through it but you’re stepping through it, and you put the body in the ground. It’s a corporal work of mercy and there’s an urgency that attaches to corporal works of mercy.”

Peterson said there are myriad reasons why so many cremated remains end up in family homes. “These could include a culture that in many ways devalues the person and life, a society that sees everything in terms of commodity, the need for immediate self-gratification, disenfranchisement from the Church by so many, which leads to a lack of a sense of community, limited to no catechetical education (and) a reduction in the acceptance of the teaching authority of the Church,” he said.

Cemetery staff often see how the burden is lifted after a cremated loved one is laid to rest. “The biggest thing is the sense of relief,” said Bob Hojnacki, director of cemeteries for the Archdiocese of Detroit. “They’ll come back and talk to us after on how good they feel that they finally took that step. It was really, really hard for them. That’s a big thing.”

The Catholic Church consecrates only two places on earth, those for celebrating Holy Mass and those for burial of the faithful. Catholic cemeteries hold bodies in a sacred trust as the Church awaits the resurrection. As the Roman Missal states, “Lord for your faithful people life is changed, not ended. When the body of our earthly dwelling lies in death, we gain an everlasting dwelling place in heaven.” The word cemetery —cimiterium in Latin; koimētērion in Greek — means “sleeping place.” The term recalls the words of St. Paul in his first letter to the Corinthians, that Jesus Christ’s resurrection is “the first fruits of those who have fallen asleep.” St. Jerome referred to the dead as “sleepers who will one day revive.”

Cremation was neither practiced nor accepted by Catholics through most of Christian history. Early Christians adopted the practices of the Jewish faithful, and especially revered Our Blessed Lord’s burial in the tomb on Good Friday. The 15-volume Catholic Encyclopedia (New York: Robert Appleton Company, 1908) put it this way: “The Christians never burned their dead, but followed from earlier days the practice of the Semitic race and the personal example of their Divine Founder. It is recorded that in times of persecution, many risked their lives to recover the bodies of the martyrs for the holy rites of Christian burial.”

In the late 1800s, Freemasons aggressively promoted cremation in the United States and in Europe — especially Italy. It was designed as a direct attack on the Catholic Church’s teachings on the resurrection of the body and eternal life. The journal Rivista della Massoneria Italiana in 1874 wrote against the belief that men and women are on a brief sojourn on earth and sacrifice everything for the life that begins in the cemetery. “This whole theory must be destroyed by the hammer of Freemasonry,” the journal said. In response to these efforts, Pope Leo XIII issued a decree in May 1886 forbidding cremation for Catholics. The decree described cremation as “the abominable abuse of burning human bodies.” Even amputated limbs were to be buried in Catholic cemeteries.

In mid-1963, two weeks after the election of Pope Paul VI, the Holy See softened its stance on use of cremation. Proponents argued that the practice no longer had anti-Catholic hostility, and the Church had never declared the practice itself contrary to the faith. New funeral rites issued in 1970 allowed for cremations, but the Church continued to favor full-body burial. The 1983 Code of Canon Law emphasizes traditional burial, but it allows for cremation “unless this is chosen for reasons which are contrary to Christian teaching.”

Cremation has rewritten the landscape of the U.S. funeral industry since the 1960s. Cremation overtook casket burial in 2015 as the preferred disposition of dead bodies. The cremation rate is projected to reach 78 percent by 2040, according to the National Funeral Directors Association (NFDA). Of the 3.9 million deaths projected for 2040, only 605,100 will involve traditional burials. Part of the explanation lies with a loss of religious faith.

“A surge in the number of Americans who no longer identify with any religion has contributed to the decline of the traditional funeral in the U.S. and the rise of cremation as the disposition method of choice,” read the 2020 NFDA Cremation & Burial Report. The report said “the percentage of consumers age 40 and older who feel it is very important to have religion as part of a funeral has decreased from 49.5% in 2012 to 35.4% in 2019.” 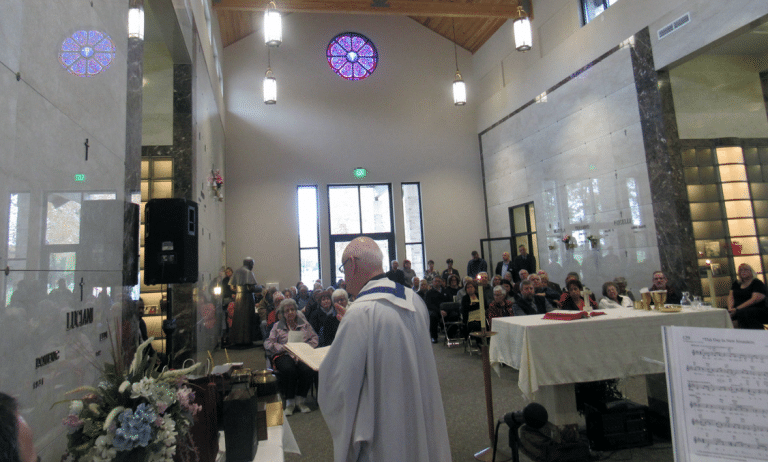 The rise in cremation rates stands in stark contrast to declines in many key Catholic demographics. Since 1999, the number of infant baptisms in the United States has fallen nearly 42 percent, according to the Center for Applied Research in the Apostolate (CARA) at Georgetown University. The number of marriages declined even more — 47 percent — during the same period. Catholic funerals declined 17 percent, the number of parishes dropped 12 percent and Sunday Mass attendance dropped 32 percent. The only category with a major increase was in people who self-identify as “former Catholics.” That number skyrocketed, from 3.5 million in 1970 to 29.4 million in 2019.

These realities leave the Church with a tall challenge: educate the faithful on Catholic funeral practices and try to re-engage with fallen-away Catholics. “The Church has a great opportunity to catechize about the value of the human person, the sacredness of life and the sacredness of the body (Temple of the Holy Spirit), the role that Catholic funerals and burial have in deepening faith as we, through those actions, engage in the Paschal Mystery,” said Seattle’s Peterson. “All of this takes work. After all, cremated remains look nothing like the corporeal body remains of a person.”

In Detroit, cemeteries are viewed as a means of evangelization. Some 50,000 people visit the archdiocese’s five cemeteries each year. “We always tell families, a cemetery is a place for the living,” Cortese said. “We know where our loved ones are, so it’s very important to us, and to me personally. In outreach, we want to bring families back. You have this community of people who are grieving with you. Through these events and Masses that we have, you see a lot of healing take place.”