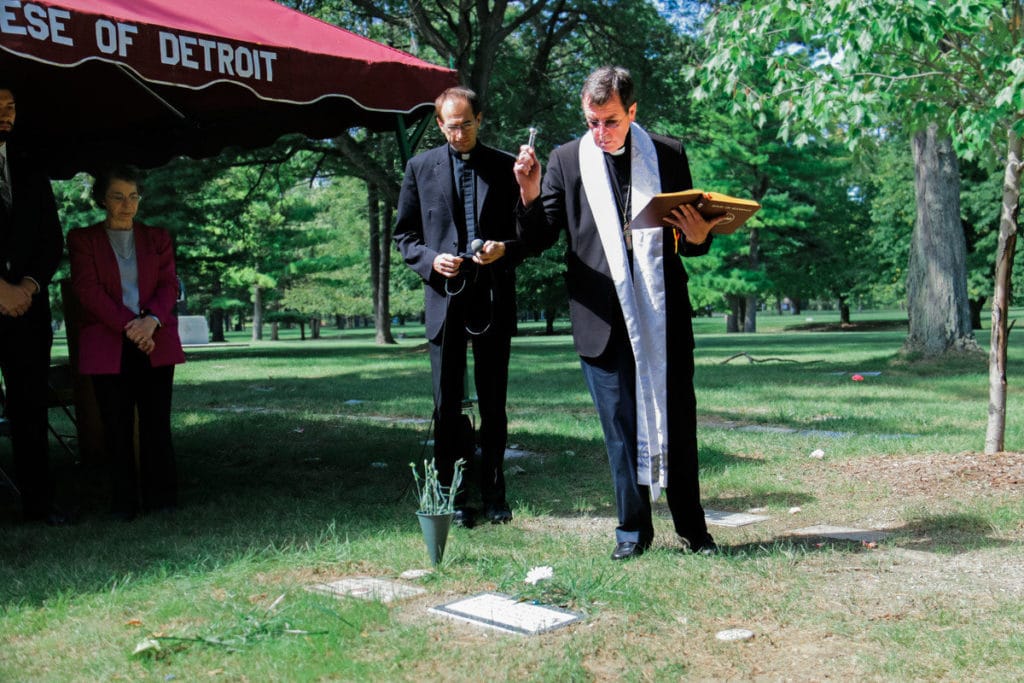 Memorial service part of National Day of Remembrance for Aborted Children, one of 180 such services held nationwide

SOUTHFIELD — In a somber ceremony on a bright sunny afternoon at Holy Sepulchre Cemetery in Southfield, nearly 80 people gathered near two tiny graves marked by a single carnation each.

Beneath the marble slabs, gently covered by tiny blades of grass, lay the remains of 37 infants, resting in eternal peace.

“We really are at a very special place,” said Monica Miller, Ph.D., director of Citizens for a Pro-Life Society. “It is special irrespective of whether there are aborted babies actually buried here, because this is the infant section of the cemetery.”

The memorial service at Holy Sepulchre was one of 180 such services held around the country Sept. 14 as part of the National Day of Remembrance for Aborted Babies, an annual event co-sponsored by the Michigan-based Citizens for a Pro-Life Society, Priests for Life and the Pro-Life Action League.

At the Holy Sepulchre service — one of five services in Michigan — Miller recalled being struck by the differences between the inscriptions on the graves of adults versus those of children.

“On adult graves, it might just say, ‘Joe Smith, father,’ and that’s about it,” Miller said. “No endearments, all very stark. On the babies’ graves, I remember one grave marker said, ‘Tread lightly, for a dream is buried here.’”

For the victims of abortion buried at Holy Sepulchre, that dream was turned into a nightmare at the hands of two local abortionists: fourteen were killed by Michael Roth and were found in the trunk of his car in September 2015, Miller said; the 23 others were victims of Alberto Hodari, buried in 2008.

The “Roth babies” were buried at Holy Sepulchre last fall, Miller said, in a ceremony presided over by Auxiliary Bishop Robert Fisher. An additional Roth victim was buried last fall at Holy Spirit Parish in Brighton.

Joining those mourning the loss of the infants, Archbishop Allen H. Vigneron was on hand to bless the grave marker covering the Roth victims’ resting place.

Addressing those gathered, the archbishop reflected upon the purpose of Catholic cemeteries as places where the souls and remains of the deceased are entrusted to God’s mercy.

“We believe that cemeteries are temporary places,” Archbishop Vigneron said. “This is where we entrust the remains of our beloved dead until the second coming of Christ. It’s only for a time that the dead are buried.

“Christ died and rose precisely so that his words of invitation, his words of inviting trust would be real and not a simple aspiration,” the archbishop continued. “We entrust these children to the ever open and ever tender heart of Christ.”

Apart from being a way to memorialize those who had been discarded and forgotten, the memorial was a reminder that abortion continues to victimize the most innocent and helpless human beings among us, Archbishop Vigneron said.

“For us, this can be a day of another kind of entrustment, to entrust to the Lord our aspiration to make abortion in our country once again illegal,” Archbishop Vigneron said. “It ought not to be legal.”

Miller, who is one of the key organizers for the nationwide prayer vigils, added that the 37 babies buried at Holy Sepulchre are some of the few abortion victims who are even afforded the dignity of a reverent burial. 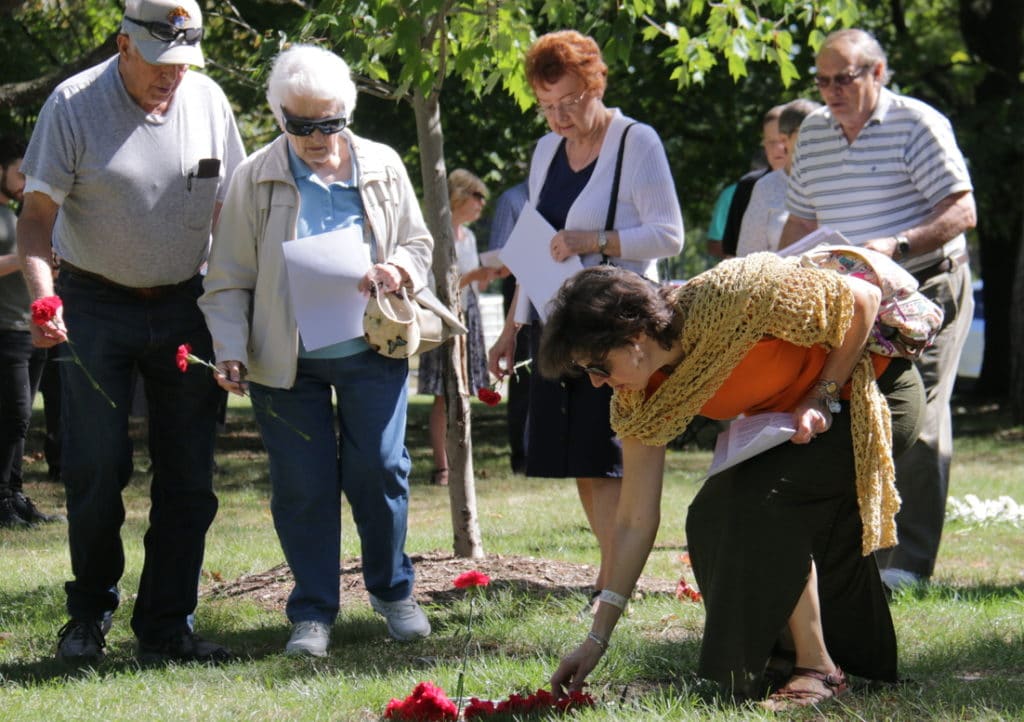 Still, all those who suffer indignity are united with Christ in his blood on the Cross, Miller added.

“Maybe it’s my personal theology, but I believe that when someone suffers an injustice that is imposed upon them, and they are incapable of doing anything about it, they share in our Lord’s suffering on the Cross,” Miller continued. “They’re with him. They are participating in his crucifixion, and that’s redemptive for them. And I believe they’re saved by that. So we can take comfort that we will see them someday.”

After the service, which included hymns and readings from Scripture, attendees were invited to place carnations on the two grave markers, and a petition was circulated to collect signatures for the Michigan Values Life petition drive, which seeks to ban dismemberment abortion in Michigan.