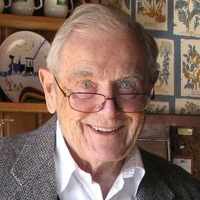 John Thomas Hoban Sr, age 101, formerly of Bloomfield Hills, Michigan, died peacefully on May 17, 2021. He was preceded in death by his loving wife of 60 years, Irene; his daughter Janet (Bill) Bernard of White Lake, MI; and his siblings, Albert Hoban and Lila Stoermer. He is survived by seven children and eleven grandchildren. His children: Anne (Spencer) Anderson of Kirtland Hills, OH; Carol Leamon (Gerry Canavan) of Sea Cliff, NY; John Jr (Liz) Hoban of Pinckney, MI; Mary (Phil) Hall of Pinckney, MI; Brian (Lisa) Hoban of Palmetto, FL; Christopher (Christine) Hoban of Bangor, PA; and Kevin (Lisa) Hoban of Coralville, IA. John was born on March 16, 1920, in Dayton, Ohio. He received his bachelor’s degree in mechanical engineering from the University of Dayton in 1943 and served in the U.S. Armed Forces from 1943 to 1946. He loved flying airplanes and trained to fly fighter planes in the Army Air Corps during the war. He later regaled his children with stories of flying upside down in an open cockpit with only leather straps to hold him in or getting lost in low, dense clouds without navigation instruments to guide him. He was quite a daredevil when an opportunity presented itself. After WWII, John met the love of his life, Irene Gutgsell of Jasper, Indiana, while she was working at Wright-Patterson Airforce Base in Dayton. They celebrated more than 60 years of marriage, raised eight children, and remained actively involved in community service and parish activities both at St. Bedes (Southfield) and St. Owens (Bloomfield Hills). John enjoyed a career as an engineer at General Motors from 1947 to 1985, including 25 years at Cadillac Motor Car Division, where he helped design state-of-the-art suspension systems. He was keen to test the latest prototypes at high speed and in varying conditions at GM proving grounds in Michigan and Arizona. Thus, it was no surprise that he would later work with the Secret Service to manage chassis production for Cadillac’s first presidential limousine. The finished product weighed more than 5 tons yet shot from 0 to 60 mph in record time. He was proud to personally deliver the car to a man he admired, President Ronald Reagan. Upon retirement, John sought ways to help others. As a lay eucharistic minister, he visited patients in area hospitals. In addition, he delivered Meals on Wheels until he was 90 years old. He and Irene also made traveling a top priority. Having been stationed in China in the late 1940s, he was fascinated by foreign cultures. Thus, their travels included India, Nepal, Europe, and Australia, among many others. On his home turf, he especially loved golf, playing often with his golf buddies and continuing to meet with them weekly, long after they had stopped playing. No doubt he will be best remembered by his family and his many friends for his lively sense of humor. He delighted in being with people, enjoyed parties, and was adept at brightening any situation with a clever wisecrack or humorous observation. Even at the age of 101, he never missed a chance to bring a smile or a laugh to those around him with his kindness, quick wit, and unfailing optimism. Services were private; a celebration of life will be held later this year. To send flowers to the family or plant a tree in memory of John Thomas Hoban Sr., please visit our floral store.