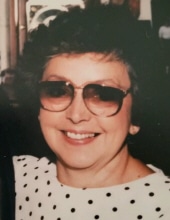 Celia Dorantes was born on February 13, 1923, to her loving parents Jose and Maria Hernandez in Primero, Colorado. She transitioned peacefully on March 14, 2022, at the age of 99. During her youth she proudly represented her Mexican heritage as part of a Mexican dance group in Detroit, Michigan. She also enjoyed cross stitching, knitting, crocheting, decoupage, cooking, sewing, and spending time with her children and grandchildren. She was an interpreter and advocate for the Hispanic community through the State of Michigan and Federal Court System. She also worked tirelessly within her community, St. Anthony, and Ste. Anne de Detroit, providing immigrants with assistance for immigration and family aid. During World War II, after she joined her husband Louis Dorantes who was stationed at Camp Kilmer in N.J., where she participated in the war effort by producing user manuals for rifles and bazookas to be used by the soldiers. Celia married the love of her life in 1942. They had seven beloved children: Celia (David) Abalos, Sylvia (Thomas) Meshinski, Dolores (Adam) Rausch, Alice (Bill) Camp, Louis (Deanna) Dorantes, Chuck (Diane) Dorantes, and Miguel (Denise) Dorantes. She was the cherished “Grams”, “Nana”, “Neni”, and “Abuelita” to 21 grandchildren, 18 great-grandchildren, and 11 great-greatgrandchildren. Celia was predeceased by Louis Dorantes, her parents Jose and Maria Hernandez, her brother Ramon Hernandez, and her sister Carmen De la Garza.